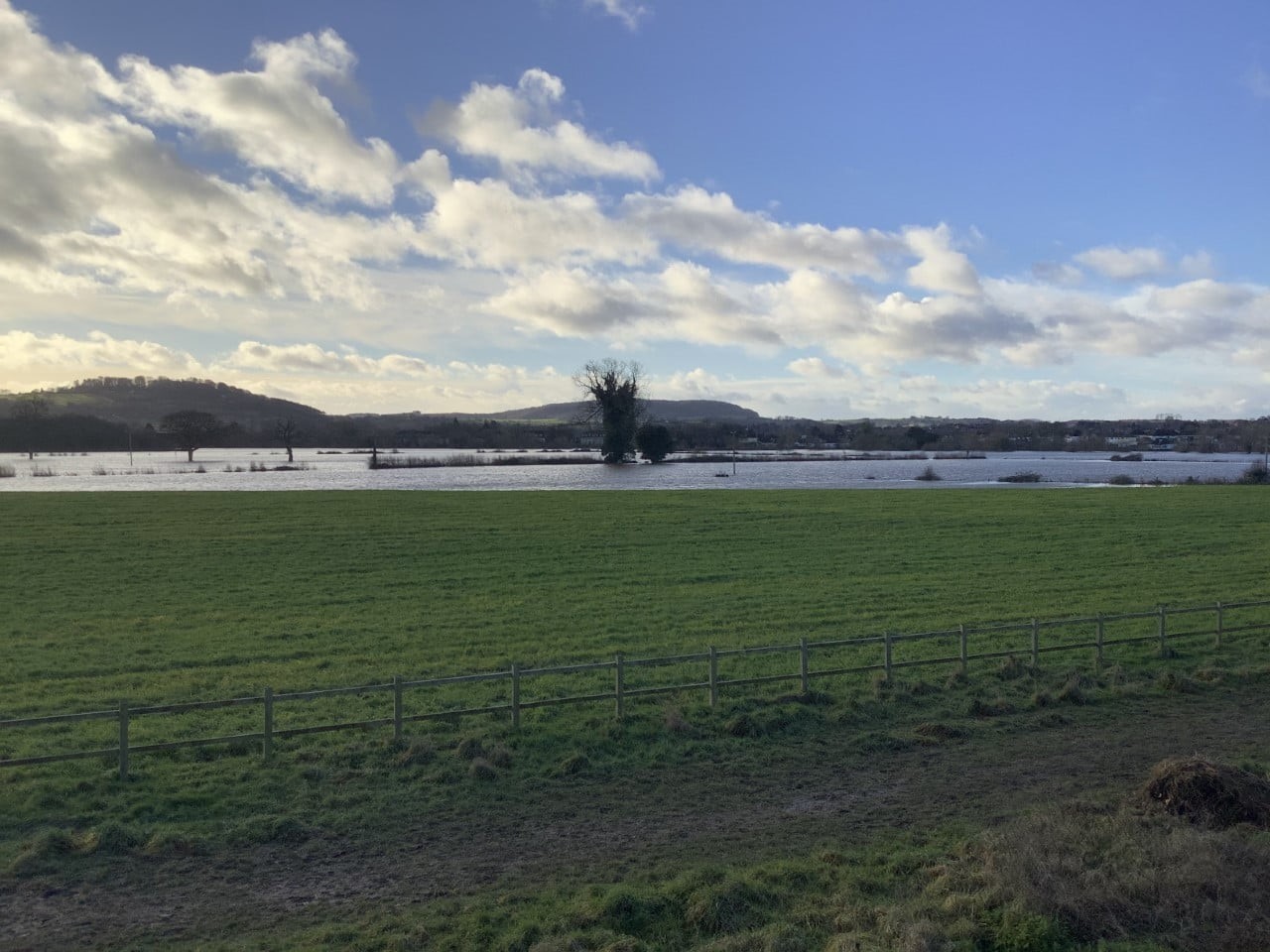 Restoring a floodplain meadow at Bartonsham Farm: the environmental case

Our vision is to support the transition of Bartonsham Meadows to sustainable wildlife-friendly management.  The current arable regime has left the meadows with negligible semi-natural habitat, and very limited biodiversity value.  The fields therefore present a blank canvas on which new habitats can be developed and environmental and social gain optimised.   The central city location means that they are regularly used  by a variety of groups so any new management of meadows needs to take into account the varying needs of the local community, whilst delivering ecosystem services and providing a diverse and rich environment in which wildlife can thrive.

A mosaic of habitats including willow carr, water bodies and traditional orchards as well as amenity areas could be developed, but the core land use most appropriate to the situation and history of the meadows, and with the greatest potential to deliver environmental gain is floodplain meadow.  In this article I describe about what a ‘floodplain meadow’ actually is, what makes this habitat special, and why restoration/creation of this habitat is so appropriate for Bartonsham Meadows.

What is a floodplain meadow?

Habitats in Britain are classified according to National Vegetation Classification or NVC.  The NVC was commissioned in 1975 by the Nature Conservancy Council to provide a comprehensive and systematic catalogue of the plant communities of Britain.  It is accepted as the industry standard classification, and provides a common language for ecologists to identify and describe natural and semi-natural habitats.

It works by grouping vegetation into types on the basis of the presence and relative abundance of plant species. The resulting plant communities can usually be correlated with other factors, particularly geology, hydrology, soils and management.

One of the key factors that affects the species assemblage is the underlying soil acidity.  On this basis NVC classification defines grassland according to three broad groups:  acid, calcareous and neutral.  Distinctive plant communities can then be distinguished within these groups, which have developed depending on other environmental and human influences.  The majority of agricultural land within the British lowlands is Neutral grassland.  This includes wildflower-rich hay meadows, agriculturally improved pastures, and wet rushy pastures.  It also includes floodplain meadows.

Flood plain grassland is characteristic of areas on which traditional hay meadow management has been carried out on seasonally flooded land with alluvial soils.  Typically the grassland would be shut up for hay in spring and mown in July.  The aftermath is then grazed by cattle, with stock being turned out at the beginning of August.  Under this system, meadows received no fertilizer apart from the manure of grazing animals, but of great importance is the winter flooding with its input of nutrients and deposition of silt and decaying organic matter.

Deep alluvial profiles accumulate under the meadows with repeated deposition of silt.  Winter flooding often leaves the meadows waterlogged for a time, but the underlying free-draining gravel profile allows the water to drain allowing the meadows to dry out.  It is thought that typical floodplain meadows are around 1,000 years old.

These floodplain meadows have a very localized distribution, with the richer examples being sparsely scattered in the Midlands and parts of southern Britain.

These three sites are examples of the NVC plant community most typical of traditionally managed floodplain meadows, which is known as ‘MG4 Alopecurus pratensis – Sanguisorba officinalis’ grassland.  Botanically, this type of vegetation is one of the most species-rich grassland communities found in the UK. The Floodplain Meadows Partnership has recorded quadrats with up to 43 species per m2, making this one of the richest neutral grassland habitats in the UK.

So what does a floodplain meadow look like?  A traditionally managed grassland is rich in plant species, and the sward can be quite tall and vigorous with larger herbaceous species such as meadowsweet much in evidence.  The composition can vary, but characteristic species are great burnet, common sorrel, meadow vetchling, meadow foxtail and meadow buttercup.

There are two species of particular note that occasionally occur on floodplain meadows.  These are the nationally scarce snakeshead fritillary and narrow-leaved water dropwort, both of which occur on Lugg Meadow, with the latter also present on Hampton Meadow.

The species-rich sward of a typical floodplain meadow, and the fact that it is left unmown for the majority of the growing season means that they offer a significant seasonal resource of pollen and nectar for a large number of invertebrate species. Bumblebees, sawflies and hoverflies can be abundant.   It follows that invertebrate predator species can also be abundant, including ground beetles and spiders.

Higher up the food chain, a grassland rich in invertebrates will benefit insectivores such as bats.  The River Wye is an important navigational route and foraging resource for bats, and the development of species-rich grassland, along with associated habitats such as hedgerows and trees would expand the foraging range of this protected group of species.

Floodplain meadows can also provide a rich habitat for a range of birds throughout the year. During the spring and summer, larger sites in particular can be important for breeding waders such as lapwing and curlew, providing ground nesting habitat and soft feeding grounds.  Whilst it is perhaps optimistic to expect nesting waders at Bartonsham Meadows given its urban location, it may be possible to manage it so as to provide undisturbed areas during the breeding season to encourage nesting skylarks, for example.  At other times of the year, especially during and after periodic flooding, they can provide winter feeding grounds for a wide range of wildfowl and waders.  Floodplain meadows also provide year-round foraging for small passerines that rely on seeds and invertebrates, and feeding and roosting habitat for wintering species such as starling, redwing and fieldfare.

A habitat rich in invertebrates, particularly if it forms part of a diverse assemblage of habitats that are retained after the haycut (such as hedgerows or stands of unmown vegetation) can support small mammals such as field vole and common shrew and the more common reptile species.

The value and function of flood plain grassland?

Whilst the biodiversity value of a traditionally managed floodplain meadow would be readily apparent if you were to walk around it in the summer months, the habitat delivers several other so called ‘eco-system services’, which would have a direct benefit to Hereford and the River Wye, as well as contributing to the fight against climate change.

Floodplain meadows can help to reduce flood peaks to towns and cities located downstream by absorbing and storing water that would otherwise flood low-lying areas.

Natural floodplains, and in particular floodplain meadows, could play a vital role in reducing the sort of flooding that has repeatedly overwhelmed towns and villages across Britain over the past decade. Meadows have the capacity to store vast quantities of flood water and release it slowly over time, lowering the peak water level.  In contrast, modern flood defences use embankments to constrain floodwater to a narrow channel. This simply pushes the problem downstream, until floodwaters reach levels that can overwhelm defences – with sometimes catastrophic results.

The reason why meadows are so effective at soaking up sudden influxes of water is because traditional meadow systems produce good, open-structured soil. This not only supports a wide range of plant species, but also increases their capacity to absorb and store water. By comparison, a regularly ploughed arable field leaves the soils more compact, reducing their ability to absorb water. Meadows represent an agricultural system that actually works in harmony with a dynamic river system: as well as absorbing flood water, they collect and put to good use the sediment that would otherwise be deposited further downstream, causing blockages and smothering valuable riverbed habitats.

Phosphorous and nitrogen are essential for plant growth, but an overabundance in the watercourse can cause adverse effects on health and ecology.  The increasing use of fertilisers in agriculture over the past 70 years has resulted in increased levels of both nitrogen and phosphorus in watercourses and concerns over water quality, and it has been widely publicised that parts of the River Wye are breaching the required phosphate limits.   Nitrate is readily lost from soil through leaching, and phosphorus is lost through soil erosion. Floodplain meadows may be able to improve river water quality through facilitating the deposition of sediment-bound phosphorus and the removal of nitrogen, as small doses of phosphorus and nitrogen can be absorbed by floodplain meadows and turned into an economically valuable agricultural crop. In this way, excess nitrate and phosphorus can be removed from the catchment and forage produced for animals without the need for artificial fertilisers. This is a very sustainable agricultural system and an excellent method for reducing unwanted nutrients (and fine sediment) in rivers, ultimately resulting in improvements in downstream water quality.

A sustainably-managed floodplain meadow can also play a role in combatting climate change.  Recent estimates of carbon storage in UK soils vary depending on the habitat type and land use. It is estimated that grazed grasslands can sequester 0.6 tonnes per hectare per year whilst the conversion of permanent grassland to arable will release between 1.0 and 1.7 tonnes per hectare per year.

Alluvial soils, such as those supporting floodplain meadows, are particularly important in carbon sequestration because they grow deeper with each flood event providing new soil to fill with carbon. In this way they can securely hold large amounts of carbon; it is claimed that in this respect they are probably only second to peat in the UK.

I’d like to end by giving a plug to the Flood Meadows Partnership, who have produced a fantastic handbook on flood meadow management.   They describe themselves as an ‘innovative project focussing on research, management, promotion and restoration of these special meadows in England and Wales’.  The Floodmeadow Management Handbook summarises very nicely the benefits of restoring and creating floodplain meadows as follows:

Anna is a freelance consultant ecologist with a background is in the public sector.  She started her ecological career 25 years ago as a botanist at ADAS in Redesdale and have worked for Natural England as a Conservation Officer, first in Kent and then in Oxfordshire.  It was in Oxfordshire that she first encountered floodplain meadows, of which there are some glorious examples along the Thames.

Anna has lived close to Bartonsham Meadows for forteen years, and regularly walks around them with her children.  She feels incredibly lucky in Hereford to have 100 acres of the countryside right in the heart of the city, as was particularly apparent during the first lockdown, when they provided safe recreational space for a variety of different user groups.

To help create the change we want to see on the Meadows please could you fill in our survey? This is vitally important to get the data we need to understand how the Meadows are used and the support for biodiverse floodplain restoration right here.

We need this data to inform our campaigning and funding.